BREVARD WOODTURNERS' NEWSLETTER
VICE PRESIDENT: Meeting was called to order by Vice President, Paul Pouliot at 7 pm, July 15, 2009. Paul reported he had sold some moreof the tools given to the club. Paul announced the time to replace Club Officers is near, must have served 2 terms.
TOOLS AND SUPPLIES ORDER: Jim Donovan said our last order for tools and supplies was in and that we have $300 toward our next $1000 minimum order for discounts. Jim reported that the roll around stand for our newest lathe had been received.
WOOD AUCTION: Harvey Driver handled the wood auction. Andy Caldwell brought in a pick-up load of fresh cut Norfolk Island Pine. Wynn Arnold also had a pick-up bed full of mixed wood. Much thanks -wood auction pays the bills for the club.
Show and Tell was as usual very good. (See Show and Tell Pictures below)
BREAK - A lot of information is traded during break time.
DEMO: Wynn Arnold gave a good demonstration on usefull tools, tips and where to get material (metal) to make custom tools. The tools he brought were passed around so members could see how they were sharpened. They worked well. (see picture of Wynn below)
Submitted by:
Vern Burness
Secretary
Posted by Newsletter editor at 8:30 AM No comments:

The Summer Doldrums, The Dog Days of August, call them what you like but they are upon us.
Unless you have the luxury or an air-conditioned shop, turning must be done early in the day
or late in the evening to be bearable. This will last for another month or so and it will be fun again, plus working on the shop instead of in the shop just doesn't get it!
We now have a website, thanks to Bill Howard of Spacecoast Woodturners who helped Susan Pouliot with the details and she got things set-up. More will be presented at the next meeting.
Good turning and I will see you on the 19th.

Jack Gregory
President
Posted by Newsletter editor at 8:25 AM No comments: 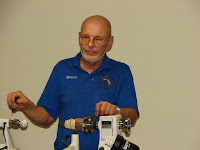 July's Demonstrator
"How to make Tools"
Posted by Newsletter editor at 8:24 AM No comments:

SHOW AND TELL
Posted by Newsletter editor at 8:23 AM No comments: 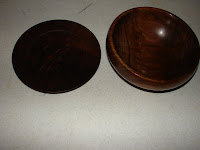 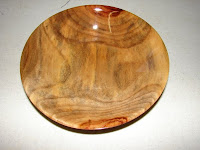 Camphor Bowl
Poly Finish
Posted by Newsletter editor at 8:16 AM No comments: 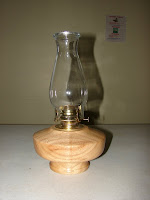